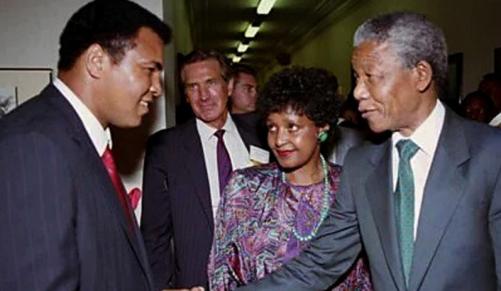 Cape Town - Boxing icon Muhammad Ali loved gazing at the colourful houses of the Bo-Kaap and being driven around Cape Town in the evenings so he could watch the city’s twinkling lights.

Standing on a rocky cliff at Silvermine one night in 1993, he looked at the lights spread out below him and remarked: "It looks like a jewel box has tipped on its side and spilled over."

In April 1993 Hoosen, with his friend Gordon Meneses, had worked under the supervision of Joburg security specialist Chad Thomas as part of Ali’s security detail when the champ visited South Africa.

Ali arrived in the country on the same day that SA Communist Party leader Chris Hani was assassinated and departed a few days after ANC leader Oliver Tambo died.

Hoosen and Thomas on Saturday said despite spending only a fortnight with Ali during an exceptionally turbulent time in the country, he had changed their lives.

Thomas, who said two Gray Security Services officers also monitored Ali during his time in the country, recalled several of his momentous visits.

Thomas would never forget that Ali, a Muslim, always carried a briefcase full of pamphlets with religious messages.

"He would sign hundreds and thousands each night and these went in the suitcase. When anyone asked for an autograph, he’d hand these out."

Hoosen, who was 20 at the time, said when he met Ali he was awestruck by his size.

"He was huge. When he shook my hand, he virtually crushed me and I’m not small. Then he put his arm around me.

"I said to him: When I was a kid I watched all your videos.’ He tapped me on the back and said: I’m just a regular guy’."

Hoosen said Ali had been soft-spoken and gentle and had not appeared frustrated by the uncontrollable shaking he experienced as a result of Parkinson’s disease.

During the Cape Town part of his trip, Ali had travelled around the city. "He loved going to the Bo-Kaap, the mosques, to Gugulethu," Hoosen said.

"We drove him on Chapman’s Peak Drive. He said it was the most beautiful ever. He wanted to see Sea Point, the lights of Sea Point. So we took him around 7 or 8pm."

One day, Ali had randomly stumped those around him while staring at Table Mountain.

"It’s the weirdest thing. Once, standing at the Waterfront, he looked at the top of the mountain and said: It’s very interesting that it’s a flat mountain. But how did they build the cable car house at the top? Did they first build the cable car, then take up the bricks?"

"We laughed, but then we thought about it."

Ali’s security convoy had been massive, with several cars, including police, near to the one he travelled in.
His schedule was meticulously planned, but he would suddenly ask the driver to stop so he could greet people - often those disembarking from taxis in poor areas.

Hoosen said Ali had never treated him and his colleagues as people working for him, but as friends.

"We would sit in his hotel room at night and all he wanted was to hear what we did."

Hoosen recalled that in a Joburg hotel he started praying with Ali.

"He would get up very early every morning for his prayers. He’d call me in to pray with him."

Before prayers, over a cup of tea, Ali would listen as Hoosen told him about his family.

Hoosen and his colleagues had been present when Ali met Nelson Mandela.

"Mandela was pouring him tea. We were there, watching one icon pouring tea for another icon."

He said Ali and Mandela had been cut from the same cloth.