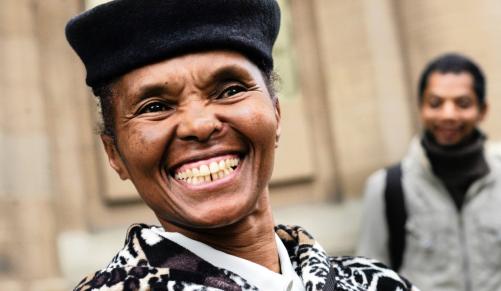 Johannesburg - Patricia Noah, the mother of The Daily Show host Trevor Noah, is being accused of being a slumlord and taking advantage of the poor.

A two-month investigation by The Star has revealed that Noah, an estate agent, owns numerous flats and is the administrator of several buildings in Hillbrow and the Joburg CBD.

Residents have accused her of allowing them to run into a state of disrepair, not paying the city the electricity they have paid for, and getting court orders to execute the properties, often buying them herself when they go on auction.

The residents have opened police cases, gone to court and complained to the city.

The City of Joburg’s Virgil James confirmed that complaints had been received about Noah.

"She at some point acted as administrator of a building and the allegation was that she was acting in bad faith," he said.

A large group of residents in Sunnyridge, Hillbrow, fear that if they don’t have Noah removed as the building administrator, they may eventually lose their homes.

The residents all have stories to tell - and numerous receipts - of paying electricity, water and levies into various accounts.

A body corporate should legally have only one account.

Some said they paid more than R8 000 a month for rent, electricity, water and levies for a flat in the decaying building, as much as many upmarket flats in more affluent parts of the city.

"I stay alone and work all day, yet I keep getting an electricity bill of R1 500. It doesn’t make sense to me," said one resident.

A special levy of R5 400 a unit was introduced to fix the lifts.

"But we can’t see anything that was done. Only one lift works," said another.

Last year, they received an electricity bill for the building saying they owed more than R1 million to the municipality.

"We wondered where all our money had been going. It was then we decided to stop paying Noah and put our money into paying a good lawyer to get her to leave," a resident said.

The windows in the building are broken, an electricity wire was used as a washline and parents are terrified their children will fall down the open lift-shaft.

They say Noah built a staircase from the basement to a roof.

"She didn’t get an engineer. She just cut a hole in the concrete. Now the pillars holding up the building are cracking. We are worried the whole building will fall down," another resident said.

Noah, as the Sunnyridge body corporate, took 28 units to the high court in May for non-payment.

She asked that the electricity to the units be cut and the properties be declared executable.

This means the properties could be seized under a court order.

The residents say the amounts they allegedly owe have been invented. The court application claimed they owe R1.07m in electricity. The court granted the order that the electricity to the units be disconnected.

The Star has, however, seen a recent electricity bill for the building which showed the city wrote off R673 000 of the debt. This leaves the building owing just R6 700.

IRS Forensic Investigations chief executive Chad Thomas looked into the veracity of the claims against Noah. IRS inspected several buildings linked to Noah, including Sunnyridge and Fattis Mansions in the CBD.

"The condition of Fattis is such that it is not fit for human habitation," Thomas said.

"Sunnyridge in Hillbrow is destined for the same fate as Fattis. You can already see the degradation setting in."

He said it was his opinion that there has been serious contraventions of the Sectional Title Act and this had in part led to the demise of these properties.

Thomas said IRS would be making its report available to the City of Joburg, the Estate Agency Affairs Board and the police.

When contacted for comment, Noah put The Star on hold for four minutes before putting the phone down.

She then sent an email with the subject line "What in the world? Exploring the role of the media in selecting and spinning stories."
Her attorney Victor Seloane said the allegations against Noah were wrongful and defamatory, and told The Star to furnish him with substantive documentation before they would comment.

The Star has done deed searches to reveal all the properties in Patricia Noah’s name.

She owns many more properties that are held in various company names.

Sedgefield: 25 units in the name Patricia Noah and 3 units in her company name, Isacchar

Properties cc, out of 77 units in the building.